I bought the machine in 1989 from Palle in Nysted. Before I achieved the 1200 ccm, one of my machines was a Harley 750 ccm from 1932 (also known as Flying Twin) with the original Golding sidecar. I had for a long time been looking for a 1200 ccm Harley, however they were not easily found. I knew where to find one, but whenever I approached Palle, the only thing he said was: find me a sidecar - so no deal was done.

I went with a good friend of mine to the exhibition in Herning and had brought along some money to see if I could sneeze up an old Harley ----- and what do I see - Palle is there with the delicious Harley which I had been chasing for so many years. It is on the top of a pickup. I look around and find Palle talking with 2 guys. I approach to hear what they are talking about. And God help me - he was about to sell "my" machine. I manage to get him away from the scaring German and Swede who were about to kidnap "my" Harley.

While we are barging heavily on the price, I notice that the papers do not match the motor number. Palle does not understand this, as those are the papers he achieved from Simon (this is the person from which Palle got it from in 1979) later I discovered that it was the right paper to the machine but because of the mistake I got the Harlye slightly. 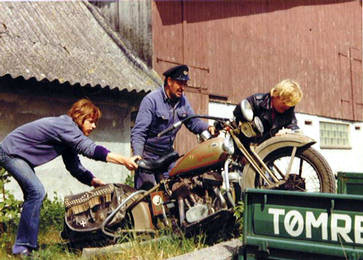 Helge in the middle, Simon at the right and a friend of Simon in 1974 when Simon buys the "Princess" from Helge

Here is the "Princess" waiting to get on the load and arriving Nysted.

Helge bought it from Arne Nielsen in 1961. He was a train guard and lived in Nykĝbing Falster. I have written a little pamphlet on 15 pages regarding tracing down the Harley - that is an amusing story, and I shall tell it later on. 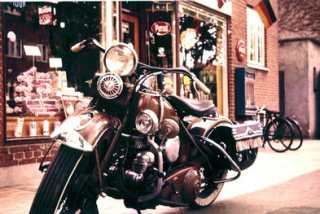 Arne buys the Harley in 1959, you can see he tries to equip her as a Hydra looking Harley with all the "fancy" stuff on


Arne byes the Harley from traffic assistant Jens Larsen from Nĉstved for DKK 1,500. -, Jens Larsen had bought it in 1952 for DKK 6,000. - from journeyman carpenter Laurits Larsen, however it was the name of the son, which was stated in the papers, though he was not old enough to ride it. It was something about the petrol ration and as they surely also had a car, he could not get petrol for both vehicles, as you were only granted petrol for one car or one motorcycle per person.


It is fun to image that only in 1959 when Arne Nielsen bought it, the price was lower than when it was brand new. Now the price can only increase. The machine will never be destroyed as it represents some sort of a saving only going up-wards. Of course this was due to the fact, that everyone had to have a little Volkswagen (VW) riding up and down the new Helsingĝr freeway to park 1 meter from the road and eat your own lunch basket


Always there was the possibility that someone you knew, came along to see that you had achieved a car - because if you were not driving on a Sunday - you surely were down In the street nursing and polishing your car - this Marguerite Viby ( Danish actor)populasings so well about.


At the beginning the Harley had police number A 3740. During the time Jens Larsen had it, it had 2 police numbers; H 9951 and L 12383. As it arrived at Lolland-Falster it achieved police number LA 10650. Unfortunately Arne Nielsen sold or gave away the original sidecar to a circus to be a swing. By your own body weight you made it swing, no mechanical machine force - only your own power to be used.

Should anyone know where to find an original - preferable a Golding sidecar or somewhat keeping with the times, with or without sub frame, I would appreciate to know - certainly If the price is fair. 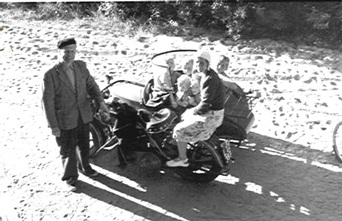 This is the family Jens Larsen at Marienlyst Strand. Jens died in 1987 a few years after I achieved the machine. The widow told me that on that trip they had all the children with them. They had 7 (seven) and if they saw a police car or a police motorcycle Jens shouted: duck in! And then there was a row in the sidecar as 5 children had to lay down as far out in the front as they could so only 2 could being seen. On this picture it has police number LA 10650 - unfortunately this is not to be seen on the scanned picture, however on the original it is shown. 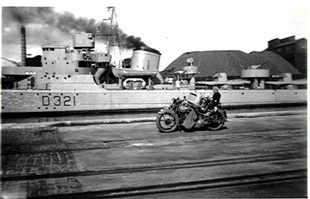 On this picture it has police number L 12383